At BEAT 2017 I got talking with a visitor who was very interested in discussing an outside mosaic project with me. She described the area  where she wanted it to go and we spent a long time playing around with various ideas and options.  Potential commissions are always very exciting at this stage as you can dream up all sorts of weird and wonderful things and they may or may not happen so the sky’s the limit. 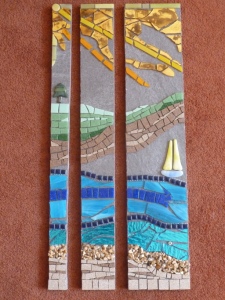 I had a picture in my mind of where the mosaic would go but as I didn’t hear anything over the next few months it was pushed to the back of my mind as other things took over.  However, in May this year I got a call “you won’t remember me…..” but of course I did. We arranged for me to go round and meet Sibel (who was also a BEAT artist) and we did a site visit – well it was nothing like I imagined, in fact it was an altogether much better location in her beautiful large garden surrounded by trees.

Sibel was very clear that she wanted a triptych as she had seen my ‘profile piece’ from BEAT and wanted something similar but on a much, much larger scale.  We agreed on all the details that morning and shook hands on the deal – something I still do – once a business women, always a business women.

I decided to make the piece on Hardie Bakker Board (also known as cement board) as is it perfect for outside and sturdy enough for the size of the mosaic.  I did a basic sketch which Sibel approved and then one of my favourite parts – shopping for the materials.

When I make a triptych I work horizontally so I always need all three pieces in situ. Now normally this is not a problem when I work on my studio but as it was our best summer since 1976 I wanted to be working outside in the sunshine as much as possible. So poor old Mosaic Roadie Alan had to carry this massive 3 part piece in and out of the house on a daily basis – obviously the more I mosaiced, the heavier it got!

I sent Sibel progress photos on a regular basis and she also had visiting rights.  The first parts I made were the tree and the boat and I was keen that Sibel was happy with those two focal points. We also had more site visits so that Alan could check how he was going to install the completed mosaic.

It did end up taking me longer than I expected – partly because I ran out of sky tiles which was the last part I did. This entailed an emergency dash to West Norwood to see James at Mosaic Workshop – luckily he had what I wanted in stock. Once the mosaicing was complete it was onto grouting. Ironically grouting is such a messy job I usually do it outside but by now it was October and very cold. So in and out I went with the triptych again while it was grouted and cleaned – that part took 10 hours so you can get an idea why this was such a long project!

Sibel had been insistent that I had the mosaic on display for BEAT 2018 which was incredibly kind of her – it certainly was a statement piece at BEAT and people couldn’t ignore it. How will I match that next year! 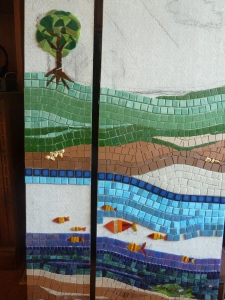 So the final and crucial part was the installation.  Off we went with mosaic, electric drill and spirit level. It’s hard enough hanging a heavy piece anyway, let alone keeping it straight. This triptych gave us a treble challenge especially as it was going onto a brick wall that was quite uneven. So after a bit of chipping away,  and making sure it was straight, Alan screwed it to the wall.  I then returned the next day to fill the screw holes with mosaic and then grout them. A final clean and polish with my trusty duster and we are done!  Whew, Client delighted, Mosaic Artist relieved, pleased and proud, Mosaic Roadie delighted to have his dining room table back.

What the Client Said: “I first came across Rosanna’s Mosaics in September 2017 on the Borough of Ealing Art Trail (BEAT). A small triptych depicting a sail boat bathed in brilliant sunshine and bobbing up and down on a cobalt blue sea was particularly memorable. It reminded me of my childhood holidays on the Adriatic. So, when I moved house in 2017 and was faced with an expanse of brick wall to fill, it occurred to me that a mosaic by Rosanna would liven up the space very nicely. A year later, Rosanna’s large triptych adorns my garden beautifully.
I liked the way Rosanna involved me in the project from inception to completion. We discussed all the stages of the project together. In the summer of 2018, I made several visits to her studio to help choose tile colours and approve designs. Rosanna was full of ideas and suggestions and sent me photos of work in progress on a regular basis. The triptych was installed in the autumn of 2018 and now brings a smile to my face every time I step onto my patio – even on a grey day!” Sibel Roller-Walach