I am always being asked ‘how did you get into mosaics – have you exhibited – where can I see your work?’  I recently put my mosaic CV up onto the BAMM website so thought it would be a goo idea to show it here as well.

COMING UP IN OCTOBER: ‘The Marple Collection’ – an exhibition of exciting new work at South Street Gallery

2015 – August: Invited to join the co-operative of artists at the new ‘South Street Gallery’ in Isleworth.

2015 – July: Harris + Hoole Coffee Shop invited me to display my work on a permanent basis.

2015 – March: Got my work into ‘North East Art Collective’ Gallery’ in Northumberland.

I think my work here is done. Thank you LOG CABIN for a great opportunity and fantastic experience.

2014 – June/July: Took part in ARThouse – Richmond Open Studios with photographer Peter Oliver and 4 other artists, based at The Beany Boo Cafe in Whitton.

2013 – March: Started selling my work in the new designer/maker shop ‘All Original’ in Ealing.

2012 – October: Started selling my work in a designer/maker shop in Whitley Bay, Northumberland. 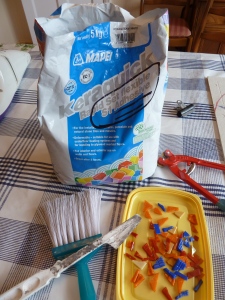 Tools of the trade

2012 – July: I was invited to demonstrate at the Traditional Crafts Weekend at The Wetlands Centre in Barnes 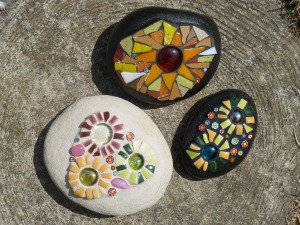 2011 – December: My friend Sally who introduced me to Osterley and makes beautiful textile work, suggested we organise an Art and Craft  Sale locally at Pitshanger Methodist Hall, inviting local artists we knew to take part.

2010 – April / May: First exhibition at The Garden Gallery, Osterley House, a National Trust Property. My friend Sally sent me an application form and I filled it in! I loved the whole experience and was amazed at the amount I sold.

2009 – October: Got a few pieces of my work into local Ealing shops; Stems flower shop and Barbara Tobias dressmaking studio.

2009 –  March: Julia had originally been taught mosaic by her friend Aimee Harman – an amazing mosaic artist who’s website had really inspired me after that first introduction. Julia and I did a weekend course with Aimee in her fantastic studio – a day of fused glass and then a day of mosaic, incorporating our glass pieces.

2008 – September: Following the Ros Waites course I did the odd mirror and pot but didn’t really have a mosaic focus. During a weekend trip to Bath I stumbled across the Mosaic Shop on Poultney Bridge and it was like stepping into an Aladins Cave! A riot of beautiful mosaics tiles in different materials and wonderful colours. They also had templates so I bought a ‘zebra design’ and that gave me my focus. This was the point where I got ‘hooked’ on mosaics, I was off!

2008 – April: My friend Anne had also got interested in mosaics and she suggested we did a course. Did a beginners weekend course with Ros Waites, where I was taught how to cut and place, learnt aout the different materials, techniques and basics of mosaic.

2007 – 29th July:  Met Julia for the first time and she encouraged me to make my first mosaic, a small coaster.

One response to “Rosanna’s Mosaic CV”